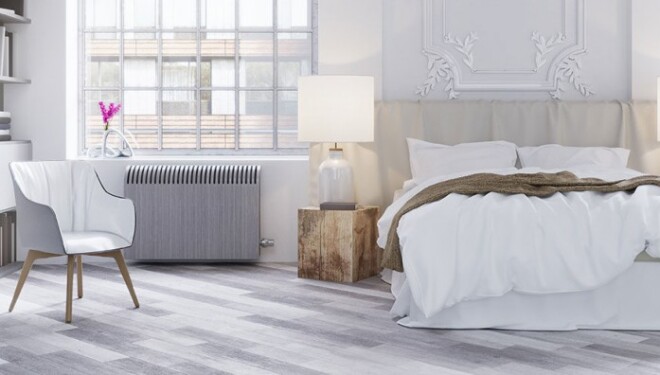 Sleep Guide is reader-supported. When you buy through links on our site, we may earn an affiliate commission. In addition, we occasionally receive free product in exchange for our honest opinion. Learn more

Decorating with white can be one of the most luxurious ways to create the ideal bedroom. White rooms tend to look bright and white regardless of how much light is actually coming into the space.  (As long as they’re clean!)

The challenge with creating a white bedroom is that the bright whites can also lack the depth and texture that many people like in the space. When mixing it up is in order, some options include bringing in different patterns and textures on white objects, or just bringing in some subtle pops of other colors to exist amongst the white. The following examples provide some different versions of all of those options. Some of these rooms like modern and sleek, while others embrace the cozy farmhouse feeling. Some of them use bright white walls, while others bring it up with some other natural and neutral elements. All of them base their decorating around white and go light on the other colors. Read on for some super inspiring white bedroom ideas.

This bedroom embraces the white look to create a really cozy bedroom. Those gauzy curtains over the bed add so much to the feeling, and they’re really quite an easy addition to a bedroom. (And it can be a reasonably priced addition as well!) A variety of different pillows on the bed creates that welcoming feeling, and a chunky knit blanket is the cherry on top.

This white bedroom is boho-inspired and pretty straightforward despite how well designed it appears to be. The elaborate item behind the bed is both a work of art and also a headboard. Something like that can bring so much detail and really create the theme in a bedroom without having to paint the wall or make any permanent changes.

This bedroom utilizes white for pretty much every element of the room beside a couple of neutral pops like grey and brown. There’s a rustic cabin vibe to the room that fits well with the outdoor environment, while still feeling fresh and modern. The blend makes the room feel like a welcoming getaway.

With this sort of a bright skylight in a bedroom, it makes sense to keep the white theme going. Placing the bed directly under the skylight provides lots of daylight for living comfortably with the natural light. In a room that bright, just a small lamp beside the bed is all that’s needed for the darker hours.

Creating a tranquil bedroom can be as simple as choosing a white theme and adding in a beautiful green plant. Leaving the mattress on the floor creates a calming vibe in the room, and with that curtain on the side, there’s plenty of privacy to be had when needed. We love how impactful the simplicity can be.

6. Adding in Lots of Texture

This white bedroom uses lots of texture to diversify its design. White is a color that is at risk of looking blown out or flat depending on the lighting situation, so the texture is a fun way to make it obvious that there are layers in the room. A few different pillows coupled with some nightstand flair is all that’s needed to really draw the eye through the space.

7. Choosing White for a Big Bedroom

Decorating a large bedroom is fun but it can be quite the task. If you don’t add enough furniture the proportions of the space can feel off. This huge bedroom is a good example of how white can be used to make the bedroom look elegant and refined. In addition to repeating white in the room, they also repeated the flow of fabric. There are similar silhouettes in every corner of the room from the white curtains to the throw blankets on the beds.

This otherwise basic white bedroom is made interesting with some pops of neutral tones. It creates a very earthy vibe while still being quite bright and clean looking. This seems to go along with the personal taste of the person who lives there since some of those earthy tones come from the accessories themselves.

9. Going the Elegant But Fun Route

This bedroom started with white at its base but then built out its design with lots of elegant items…and a fun one as well. (Check out the version of that print on the wall.) It’s interesting how the floor, the wall, and the bed are all whitish shades and yet they look totally different at the same time.

10. A White Bedroom With Lots of Patterns

This bedroom is mostly white but there are tons of patterns added in made up of other colors. They chose black to be the color that highlights the patterns, which brings a lot of nice contrast to the space. A variety of different printed pillows on the bed really set the theme for the rest of the room and inform the mood.

11. All White in a Limited Space

This attic bedroom is quite small but it doesn’t seem to be lacking. The use of white on the ceiling down to the floor helps to create the illusion that the space is larger than it is and highlights the feeling that it’s stretching upward. Placing the mattress on the floor always helps with that feeling of expansiveness as well.

We’re swooning over this Moroccan inspired white bedroom. It’s a good example of how white can be chosen as a staple color but still be balanced with darker shades and patterns as well. In this case it’s mostly the bed area that’s white, which helps to create a sense of separation from the sitting area in the room which follows a different design.

13. A Pop of Floral in a White Bedroom

When going with an all-white decorating scheme, choosing one item or element to pop can be nice a touch. In this white bedroom they went with a floral bench, which still features a white background but also adds some blue into the room. They also added a lot of texture with the pattern on the wall.

14. White With Gold and Silver Accents

Rather than going with basic neutrals, this white bedroom chose gold and silver to accent its white design. The result feels a bit glam while also being approachable and realistic. That approach matches the rest of the surroundings, as the room was obviously built to be user friendly.

This white bedroom started out with a whole lot of white brick wall, so they chose to continue with that theme and just bring in some other subtle colors. The peachy pink shade is a common pairing with grey, which is also seen here. Rather than appearing to be a stark white room, the effect is rather muted in a cozy way.

16. The Back to Basics Bedroom

This white bedroom went all the way back to basics. You can tell by the stairs and the brick in the other room that this home was constructed in a particular manner. The wood that was added in as beams enhances that point, while the white surroundings make the place feel like a spa experience.

Grey is a great neutral to mix with white in a white bedroom since it’s not black but on the spectrum. It’s all that needed to take this bedroom from a plain white room to a soft and developed looking bedroom. Subtle frames and decorations round out the simple but cute design.

This farmhouse inspired white bedroom is super bright and inviting. They’re making good use of the natural window light by giving it some nice white items to bounce off and infiltrate the room. They added in a few other neutral colors to tie things together and match that natural wood beam across the top of the room.

This white bedroom mixes things up by adding in some neutral pops. In this case neutral is both natural wood tones and also those animal print pillows. (Yes, animal print can be a neutral!) It’s a good reminder that adding in some fun details can really increase the energy in the room.

We love how everything in this white bedroom is white…top to bottom. Making this work requires embracing a few different textures, which you can see in this example. A beaded chandelier is a great way to add some visual interest above the bed, and the different textures on the pillows bring a lot of interest to the bed as well.

Your experience on this site will be improved by allowing cookies.